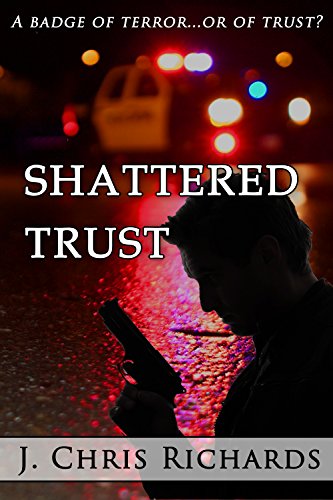 In today’s society, sometimes it’s hard to tell the good guys from the bad. That’s what Shattered Trust by J. Chris Richards is all about. Officer Logan Taul has become one of the bad guys, but one night he sees the monster he has become reflected in a storefront window as he brings his nightstick crashing down toward a teen’s arm.

This revelation causes him to rethink the man he has become, not just in his job, but in his life. He decides he doesn’t want to be that monster–but the road to redemption isn’t easy. Facing physical attacks on both himself and those he loves, as well as attempts to frame him, weaken his resolve.

In addition to trying to set things straight, he also tries to reunite with the family he deserted, but they don’t trust him. How can they? He left them, without a trace, years ago. How do they know he won’t leave again?

J. Chris Richards wrote an exciting, intense novel about how a police officer can let his authority turn into a temptation for power and control. She does an excellent job of presenting what can happen when an officer falls to that temptation, as well as how hard and long the road back is (or should be). She creates a character with depth that we all can relate to in one way or another, as we’ve all made mistakes/committed sins we regret and long to be forgiven of; actions we no longer want to commit. She also shows how long and hard the road to forgiveness, redemption and the restoration of trust can be, and how worth it, it is.

Shattered Trust kept me turning pages and cheering for Officer Logan Taul, as well as some unlikely characters who stand behind him, encouraging him along this path. I encourage you to read Shattered Trust by J. Chris Richards. It’s a great debut novel, and I look forward to reading more from her.