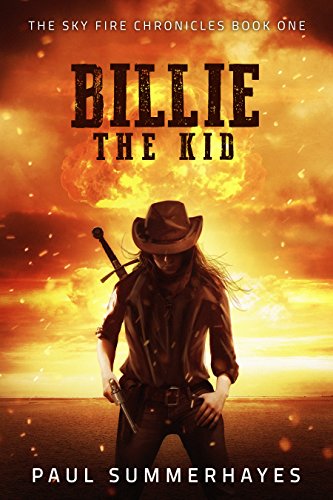 This is the newest release by Paul Summerhayes.

I chose to read Billie the Kid by Paul Summerhayes: 1) I am an Old West fan. Therefore, the title caught my attention; 2) I like the cover; and 3) a friend told me about a weekly email she signed up for that sends titles of “clean” fantasy/speculative fiction stories, and since I’ve begun to enjoy this genre and prefer to read “clean” stories, as well as the two previous reasons, I chose to read this book.

As a writer, I like to know more about the author and the book that I choose to read. Therefore I googled “Paul Summerhayes” and found his website where I learned that he calls this book “Historical Fantasy”. I also learned that there was a prequel–a novella, The Texan and the Egyptian. I also learned about the other books and other genres that Paul Summerhayes writes. The other thing I learned was that Paul Summerhayes has been a computer gamer for a long time, and that he has had the opportunity to write professionally for the gaming industry, and I learned that Billie the Kid was self-published by Paul Summerhayes. On Mr. Summerhayes’s website, I also found his blog and read a few of his blog posts and read that he does a few of his own revisions and then sends his work to an editor. After acquiring all of this information, I eagerly read The Texan and the Egyptian as well as Billie the Kid.

My first thought as I read Billie the Kid was that it wasn’t what I would call “clean”. There is profanity scattered throughout the book. It’s not Mr. Summerhayes fault that I was disappointed by this, for he had nothing to do with the email that claimed this as a “clean” fantasy/speculative story. But I now know not to trust that email. I learned as I continued to read Billie the Kid that this email must consider anything without explicit sex scenes “clean”, for that was, thankfully, no where to be found in Billie the Kid.

Now for the story itself, I liked the character, Billie, enough to read to the end to see what would happen to Billie. However, I was not impressed by the actual writing of the book. The vocabulary was simple and there were quite a few grammatical errors throughout the book. I am used to reading fantasy/speculative that has a more developed world, as well as a more complicated plot line and well-developed characters.

I wouldn’t call this “Historical Fantasy” because, though it supposedly took place in the old west, everything was so futuristic and fantastical that there was virtually no actual history in it.

I also found that it is very loosely a series so far, as the prequel was not really tied into Billie the Kid with the exception of the mention of a character from the prequel in one scene and the very brief appearance of two characters, from the prequel, with no real interaction in another scene. I’m not sure if Mr. Summerhayes has plans to weave a stronger thread in future books, but in my opinion, to write a series, there needs to be a fairly strong connection from book to book to keep readers interested in reading the entire series.

I would also say, that, having read one other book that was actually written about computer gaming with for an intended computer gaming audience, I would say that Mr. Summerhayes’s book would most likely be most appreciated and valued by computer gamers who take the time to also enjoy a book now and then. This is based on the fact that Mr. Summerhayes includes lots of action and violence in the book with minimal description of the world and very little explanation of the plot line. So, though I found the story interesting enough to stick with it to the end, I also found it lacking.

Disappointment was my takeaway from this story, especially when the story revealed the current cultural view that “everyone is inherently good; no one is really bad”, as there were no clear cut good guys or bad guys. I believe our culture needs to get back to “seeing” that there is clearly good and bad and not everything is acceptable. Therefore when the cultural view finds its way into our stories, I believe we have a very serious problem, and I hope this certainly does not become the norm.

Finally, though I found the story interesting enough to read to the end, I was more disappointed than anything with the overall story, and I will not be reading any future books in this series.

4 thoughts on “Billie the Kid by Paul Summerhayes”