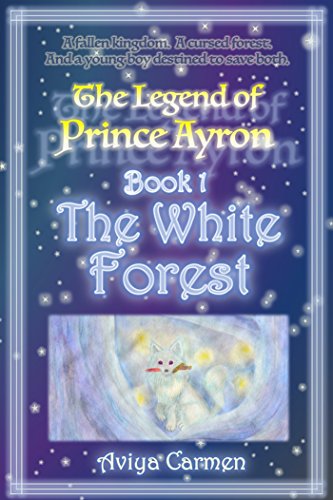 The White Forest: The Legend of Prince Ayron (Book 1) by Aviya Carmen is  a fantasy story that also reminded me of an allegory. The story is simplistic and has an abundance of dialogue and lacks action.

There are a lot of quotes from the Bible, but they are not properly noted, and I felt there were too many quotes, as Ms. Carmen quoted full chapters.

The story is sweet and Ayron has an innocence about him that is endearing. It is easy to care for him and want to see him reach his goal.

I believe this story would appeal to elementary age children; that they would find it fun to read, and I believe it would hold their interest.

There is a Christian theme running through the book, and though I suggest this book for elementary aged children, I would also caution parents that there is a sprinkling of profanity in a couple of scenes.

The White Forest: The Legend of Prince Ayron (Book 1) by Aviya Carmen is the first book of a series, and Ms. Carmen did something that I do not like in a series’ book, and that is she had no resolution at all at the end of this story. As a matter of fact, the story just seems to drop off in the middle of another conflict for Aryn, the main character. I prefer that even the first book of a series have some resolution at the end of the story, leaving me with some satisfaction as I await the next book because often, the next book is at least a year away.