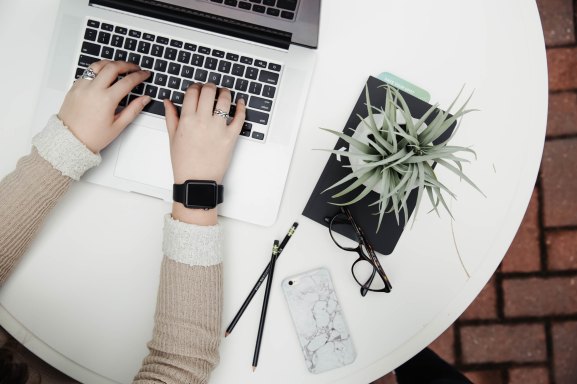 Photo by Corinne Kutz on Unsplash

Julie rushed through the library clasping her folder to her chest, tears stinging the backs of her eyes. As she burst out the library doors, she gulped the warm fresh air, relieved to be rid of the feeling of suffocation. She fast-walked toward home, longing for the safety and solitude of her bedroom.

As she walked, the dam broke, and tears gushed forth. Why are people so mean? Why are they so critical and judgmental? Hadn’t anyone ever taught them that “if you don’t have anything nice to say, don’t say anything at all”—words Grandma Rose had drilled into her head?

Julie’s family’s house came into view, and Toby Jefferson, her best friend for the past three years, sat on the top step of the large front porch. She slowed her pace and scrubbed her tears away with one hand, while retaining her tight grip on her folder. She hoped her eyes didn’t look too red and puffy.

Julie turned onto the gray stone walkway leading to her house. Her eyes met Toby’s, and he grinned. She offered a small smile.

She stopped before him, and he patted the porch floor next to him. “Have a seat.”

When Julie was seated, Toby turned to look at her. “So, how’d it go? What did they say?”

One look into his kind, encouraging, chocolate brown eyes and she came undone. Sobs shook her slight frame.

Toby wrapped an arm around her and stroked her long black hair. He just held her until her sobs subsided, then she sat up, looked at him through watery blue eyes, and sniffed. “Oh Toby, I don’t think I can do this. Apparently my writing isn’t any good. They hated it—said the characters aren’t developed enough for them to like them, let alone care about them. They said I have no idea how to write a story people will want to read, and I shouldn’t waste my time.” Another tear spilled from her eye.

Toby, one arm still around her, rubbed her shoulder. “Didn’t they offer suggestions on how to do the things they think are missing?”

Julie shook her head and sighed. “Don’t ever suggest another writers’ group to me again. The people in those groups are mean and cruel. First, it was the two groups you suggested online that said I shouldn’t write again until I take a college creative writing class, and now this. Maybe I’m not really cut out to be a writer after all.” She laid her head on Toby’s shoulder and leaned into him.

“May I see the piece you shared?” Toby spoke into her hair.

Julie sat up and looked at him, tears, once again, pooling in her eyes. She shook her head and wrapped both arms around the folder.

“Come on, Jules. You’ve let me read your stuff before. You know I’d never be like those other people.” He gently brushed a few strands of hair from her face.

She lowered her gaze. “I’m sorry. I can’t. Not today.” She rose to her feet. “I’m going to my room. I’ll talk to you later.” She turned toward the house.

Toby got to his feet. “Jules…”

His pet name for her always made her breath catch in her throat. She wondered if he knew, that six months ago when he became the champion for her writing, she’d fallen in love with him. She turned to look at him.

“Aw, never mind. I’ll talk to you later.” He turned and walked down the porch steps.

The next day, Toby met Julie at her locker at lunchtime like he did everyday. She greeted him with a large smile.

He quirked an eyebrow at her. “Didn’t expect to see such a bright smile on your face.”

“Do you remember I told you, Miss Wilson, my English teacher convinced me to enter one of my short stories in a contest a few months ago?”

“Well, today she informed the whole class that my story won first place!”

Toby wrapped her in a hug, lifted her from the floor, and spun her around. Then he set her down and looked into her eyes. “That’s great, Jules! One day you’ll have a bestseller.”

Heat crept into her cheeks, as he still had his arms around her, and other students stared. She nodded, looking up at him, his face so near to hers. “Miss Wilson also said she’s part of a very good writers’ group, and she wants me to go to the next meeting with her … this Saturday.” She bit her lower lip.

Toby grinned and they walked to the lunchroom, his arm around her lower back.