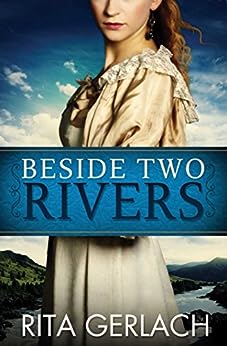 Beside Two Rivers is book two in The Daughters of the Potomac series by Rita Gerlach. I think I read this book much faster than the first one. This book is about the life of Darcy, the daughter of Eliza from the first book.

Once again, Rita Gerlach has created well-developed characters that I could relate to immediately, and, again, I cheered for them, grew angry when others mistreated them, ached with them through their struggles, cried with them in their times of sadness and loss, and laughed with them in the good times. The characters in these books become like good friends.

I found it interesting that two of the characters, in these first two books, were cousins but had more similar character attributes and attitudes than some brothers. However, I longed for one to find redemption. The other I simply disliked and held no sympathy toward–there has to be one of these in almost every book.

I was also extremely pleased that the things, I longed to have resolved in the first book, were resolved in this book. Maybe not the way I had wished, but in a satisfactory and understandable way.

These are the first books I have read by Rita Gerlach, and I have to say that Ms. Gerlach is now on my list of favorite authors, and I will look for more books by her as soon as I can.

Again, this story was an historical romance story, so if that’s the kind of book you like to read, I’m sure you’ll like these books. I have one more to read to complete this series, and I plan to begin reading it tonight.