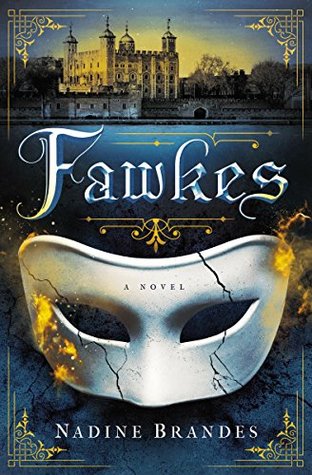 Fawkes is an historical fiction novel by Nadine Brandes. It is about a plot against parliament, which is an event in history, but Ms. Brandes has added a fictional fantasy story line which is about the power of colors. She has also included the plague in the story because the plague was really happening during the time period of this story. However, she has chosen to put an interesting twist on the plague as well.

I must say that if it wasn’t for my interest in the main character, Thomas, the son of Guy Fawkes, an actual historical character involved in the plot against parliament, I’m not sure I would have continued reading this book beyond the first few chapters. There was so much emphasis on color power and masks in the first part of the book, that I found it to drag on and on. I didn’t actually get really interested in the book until the second half.

I suppose part of the reason I didn’t fully enjoy the story is because I didn’t fully understand the battle between the Keepers and Igniters, and though I thought the White Light was supposed to represent God, I didn’t think it was an accurate representation.

The story began to pick up when Thomas discovered his friend, Emma’s secret, which had a profound effect on their relationship, and from there Thomas began to search for answers pertaining to the color powers and the truth behind them. He had never been comfortable with the constant fighting between Keepers and Igniters and the killing of innocent people. He also wasn’t comfortable with the plot his father and his friends were planning against parliament. He had some difficult decisions to make, and he’d been infected by the plague twice.

As Thomas fought his own internal struggles and the plot against parliament began to be put into action, the story finally hooked me, and during the last third of the book, it definitely kept me turning pages. I was very pleased with the ending as it was realistic and satisfying.

I must say that Ms. Brandes did an excellent job with writing this story. It is very well-written and I found no mistakes that should have been caught in the editorial process, which tells me that Ms. Brandes had a good editor, maybe more than one, so there were no grammatical or typographical errors.

The thing I am most thankful for is that Ms. Brandes included a section in the back, “What’s True and What’s Not”, where she explained what was historically true and where she received her information, and what she chose to add to write a full-length historical fiction novel about an historical event. I had never heard of Guy Fawkes or that particular plot against parliament (apparently, there were several).

This was the first book I’ve read that is a Fantasy Historical Fiction, and as I am a new Fantasy reader, maybe that was part of my problem with this book as well, because I love Historical Romance stories. I think the Fantasy part of this story just didn’t appeal to me. I know many people who read it and loved it, so I know my lack of interest is due to my own opinions and not anything Ms. Brandes wrote, and as I said, I did really enjoy the last third of the book, and was invested in Thomas Fawkes, the main character, from the beginning. Therefore, I hope, if you are considering reading Fawkes, you will give it a try, especially if you’re a big Fantasy fan because you might really like it.