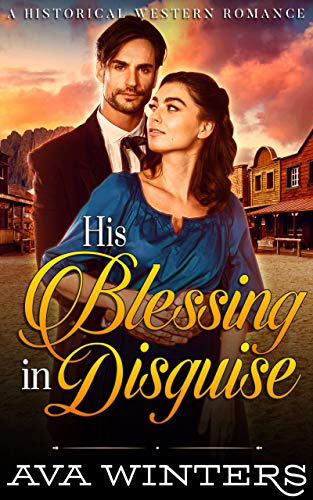 “His Blessing in Disguise” by Ava Winters is a sweet romance story. I gave this story a 4-star rating based on the story line and characters. Ms. Winters did a good job of making her characters believable and likeable. The story line was interesting and had just the right amount of tension and conflict.

“His Blessing in Disguise” is set in the Old West where Layla runs away from her outlaw husband to begin a new life on her own. She finds her place in Richstone but complications arise when she begins to have feelings for one of the town’s lawmen, then her outlaw husband comes looking for her.

Tensions heat up as Layla’s outlaw husband convinces her to leave town with him while the lawman, now Sheriff, has already given his heart to her but will not stand in the way of husband and wife. Will Layla and Peter ever see each other again?

For those of you who dislike reading books with editorial mistakes and flaws, I have to say if I was rating this book on the technicalities of writing, I would’ve given it three stars. In addition to too many dialogue tags in the first chapter, there were typographical errors and wording issues scattered throughout the book. The biggest problem I came across, however, was the fact that one entire scene was immediately rewritten following the first telling of the exact same scene but with a different setting and some other differences. I really can’t see how that happened, but it led to quite a bit of confusion on this reader’s part until the story returned to its proper place.