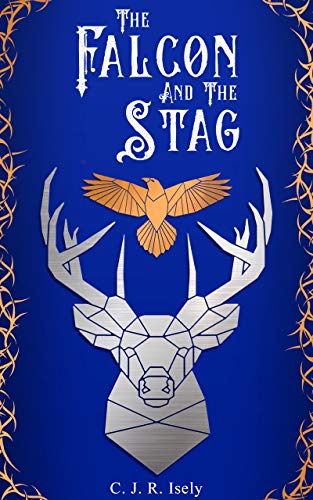 The Falcon and the Stag by C.J.R. Isley is a short story that introduces her “William of Alamore” series. It is a story of kingdoms and knights, and two brothers, the oldest who had been prepared to take the throne, and the youngest who wanted it.

This short story is filled with tension, suspense, conspiracy, and sibling rivalry. C.J.R. Isley does a fine job introducing the characters and showing their personalities and character, drawing the reader into the story and encouraging them to choose sides.

C.J.R. Isley captures and holds the reader’s attention from the first to last page, writing strong dialogue and tense scenes of confrontation and sword-fighting. C.J.R. even manages to throw in an unexpected twist or two.

This story is acceptable for young adults and adults. It may also be acceptable for middle grade readers, though there is some violence — nothing too graphic.

This short story is well worth the read, but be warned — after reading it, you’ll want to pick up the first book in the series, Ranger of Kings, which is exactly what I plan to do.

I give The Falcon and the Stag by C.J.R. Isley 5 stars.

2 thoughts on “Special Saturday Post: The Falcon and the Stag by C.J.R. Isley”