Today, I am taking a break from Flash Fiction Friday to bring you an author interview with Lillian Duncan, Christian Mystery/Suspense writer, who has a new book out, Game On.

Tell us a little about you.

My husband and I live in a small town in Ohio. I mean small—we only have 1 traffic light. But I love being back home. I grew up in the area, but moved to the big city of Cleveland for many years. Like Dorothy, I love being home again.

What is your favorite genre to read? To write?

The answer to both is Christian mystery and suspense with a little horror thrown in from time to time. I guess writing is sort of like eating. You are what you read, and for me that means I’m a suspense/mystery writer.

Tell us about GAME ON. 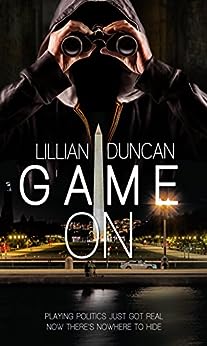 Just because you’re paranoid doesn’t mean that someone’s not out to get you!

That’s the premise behind GAME ON. Politician Lucas McMann believes he’s the victim of an elaborate stalking game. Since he has no proof, his friends and colleagues believe he’s being paranoid.

He needs someone to help him get the proof and that’s when he turns to Nikki Kent, someone from his past. She’s a private investigator now, but the last person she wants in her life is Lucas McMann. He deserted her years ago when she needed him most, but her new found faith won’t let her say no to him.

And that’s when the game begins!

Tell me a bit about your main characters.

Lucas McMann is a politician with a big problem–actually two. First, he believes he’s the victim of an elaborate stalking game. His second problem is that no one believes him because there’s no proof. He can’t move forward until he stops the game. He can’t stop the game until he discovers who’s behind it. To do that he needs someone who will believe in him enough to help him get the proof he so desperately wants.

And he knows just the person, if only she’s put their troubled past behind her.

Private Investigator, Nikki Kent makes a living finding out other people’s secrets, but she has one of her own. When Lucas shows up asking for her help, she refuses. She can’t take the chance of her secret coming to light. But her new-found faith won’t let her turn her back on someone who is desperate for her help—even if he was the first man to break her heart!

What’s the setting for GAME ON?

Most of the story takes place in Maiden, North Carolina which is a real place. But that’s the only thing that’s real. The specific places talked about in the story are a figment of my imagination.

Who is your favorite secondary character in this latest novel, and do you think you’ll include that character in a future story?

Lucas’s mother is my favorite secondary character. She’s a gun-toting Southern belle who believes in being able to protect herself.
Do you have personal experience with any of the events in your story, and if so, could you share about that?

Not in the least! My suspense stories are just that—stories I create.

What inspired you to write this series, or this novel in particular?

Actually I was watching a TV talk show. This particular guest believed that many of his “friends” were actually stalking him. My writer’s mind took over from there and I created Lucas McMann, a politician who believes he’s being stalked but nobody else does. And it went from there.

What do you want readers to take away from GAME ON?

I think there are several lessons to be learned. One of the most important is that forgiving others isn’t letting them off the hook. It’s letting go of your own anger and bitterness so you can have the life God wants for you.

What is your writing process?

I never know what is going to happen in my story on any given writing day. It’s as if my mind is a movie screen and I watch that day’s events and then I write it.

When I start a new story I usually have a clear picture of the main character in mind and what obstacle he/she will face, but anything goes after that. If I’m writing and start to feel bored—then I kill someone or blow something up. And that way it’s a surprise to me and to my readers.

Do you know who the bad guy is when you begin your story?

Not usually. Most of the time I have several characters who it might be and as the story comes to a conclusion, I’m surprised right along with my readers.

Most people don’t think of murder mysteries and suspense novels as Christian Fiction. What do you say to them?

I can certainly understand their point of view. And for some readers my stories might be a bit too graphic or edgy and that’s okay, I would say my readers are those who like traditional suspense and mystery novels but are tired of all the explicit language and sex scenes that aren’t necessary to a good story.

I don’t promote or glorify violence in my stories and show characters experiencing the natural consequences of their bad choices and bad actions. My characters are usually on a spiritual journey as well—but some are further along than others.

What are you working on now?

I just finished the final edits on the third in the Deadly Communications series. Its title is DEADLY SILENCE. In it, Maven will be back and facing some very difficult life circumstances.

Along with that, she’s working with a late-deafened adult as a client. A subject near and dear to me since I’ve lost all my hearing in one ear and a significant amount in the other because of the brain tumors.

I also have several other stories in various stages that I’m working on.

If you could offer a word of encouragement to an aspiring author, what would you say?

DON’T GIVE UP! It took me 15 years to get a traditional contract, and now I have almost 20 books published! If I can do it, so can you. But not if you give up. KEEP WRITING!

HOW CAN READERS FIND YOU ON THE INTERNET?

My website is www.lillianduncan.net and I have a devotional blog at www.PowerUpWithGod.com My blog is TIARAS & TENNIS SHOES at www.lillian-duncan.com. I’m also on Twitter as @LillianDuncan and on Facebook at http://www.facebook.com/lillian.k.duncan

Paper or e-reader? There are certainly pros and cons to each. Which is your favorite?

I prefer a “real” book with paper. Unfortunately, I don’t read them that way very often because of my eyesight. So, I use an e-reader almost exclusively these days.

Do you have a favorite or “life” verse? Why is that one important to you?

Romans 8: 28: And we know that in all things God works for the good of those who love him, who[a] have been called according to his purpose.

In 2012, I was diagnosed with brain tumors. The treatments and the side effects wreaked havoc on my health! I was very sick but I kept repeating this verse over and over. It kept me trusting God and it kept me in peace and joy in spite of how bad I felt at the time.

What’s your day job? Tell us a little about it.

I retired as an SLP from a large city school district in Ohio, then spent several more years working part-time in smaller, rural districts near where I live. Between the two jobs, I don’t think there is any type of child I haven’t worked with at least once.

I loved my job and miss it. Mostly I miss the children, not the paper work. If it weren’t for serious health issues, I would still be working.

What sort of serious health issues?

In 2012 I was diagnosed with bilateral brain tumors and subsequently a genetic disorder called Neurofibromatosis Type 2. A long name that basically means I can develop tumors at any time on my nerves but especially in the brain.

It’s been a long, long journey but God is good. There’s a lot I can’t do these days, but I can still write!

How did your education or previous career impact your journey to publication and where you are now?

Anything else you need to tell us?

To celebrate the release of GAME ON, I’m giving away a virtual basket of goodies on my blog, Tiaras & Tennis Shoes including Amazon gift cards. For all the details, just click on that link. Simply leave a comment on the blog post GAME ON and you’ll be entered.

Also, my publisher outdid herself when she created this GAME ON book trailer.

And lastly, thanks for having me.

BLURB for GAME ON

Politics is no game when a stalker nears and there’s nowhere to hide.

A run for the senate is just a step on the road to the White House for Congressman Lucas McMann. But his public profile has put him in the middle of a crazed gunman’s twisted game of stalking. If he wants to win the election and reclaim his life, he’ll need the help of the one person who’d rather leave their past behind them.

Private Investigator Nikki Kent knows how to dig up secrets and discover those who exist in the shadows. She should. She’s good at hiding secrets of her own. Can she risk her own discovery for someone so desperate for her help? For the first man who broke her heart?

With new-found faith, she’ll help Lucas search for the answers. But with the truth comes a danger they must face together.

Lillian is a multi-published author who lives in Ohio Amish country with her husband. After more than 30 years working as a speech pathologist for children, she believes in the power of words to transform lives, especially God’s Word.

Lillian writes the types of books she loves to read—fast-paced suspense and mystery with a touch of romance that demonstrates God’s love for all of us. To learn more about Lillian, you may visit her at www.lillianduncan.net or www.lillian-duncan.com. She also has a devotional blog at www.PowerUpWithGod.com.