Today’s theme from The Broke and the Bookish is a Holiday Gift Guide Freebie, which means you create a list of ten books that would be great gifts for Dads, YA lovers, etc. So my TTT is Top Ten Books to buy for your Middle Grade Reader, and every one of these books is Book 1 of a series.

Kate O’Connell and her mother are left to struggle in 1906 Minneapolis after her father dies in a construction accident. Praying for a new husband for her mother, when God actually answers her prayers in the affirmative, Kate dreads what will happen next. Becoming part of a Swedish family in Wisconsin, Kate begins to get into conflicts with her step-brother Anders. When she notices some strange things happening around the farm, will she and Anders learn to work together to solve the mystery?

Join cousins Beth and Patrick as they travel back in time to Greenland circa 1000 to find a Viking sunstone! While visiting Whit’s Soda Shoppe, the cousins find a mysterious, old letter in Imagination Station asking for Viking sunstone; if the sunstone isn’t found then someone named Albert will be imprisoned. Beth and Patrick race through time, meet the Vikings Erik the Red and Leif Eriksson, and locate the sunstone.but when they return to the Soda Shoppe another note is waiting for them requesting a silver goblet.

The Sugar Creek Gang series chronicles the faith-building adventures of a group of fun-loving, courageous Christian boys. These classic stories have been inspiring children to grow in their faith for more than five decades. Children continue to grow up relating to members of the gang as they struggle with the application of their Christian faith to the adventure of life.

The Sugar Creek Gang discovers a “disguise” hidden in a sycamore hollow. Does it belong to the bank robber hiding in the swamp? A mysterious map hidden near the tree proves to be even more exciting then the disguise. Before the adventure ends, the gang encounters the robber, helps Bill Collins welcome a new baby sister, and saves the victim of a black widow spider bite. Join Bill and the rest of the Sugar Creek Gang as they learn the lesson of “sowing” and “reaping.” 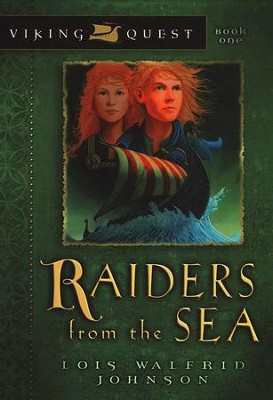 In one harrowing day, Viking raiders capture Bree and her brother Devon and take them from their home in Ireland. After the young Viking prince Mikkel sets Devon free on the Irish coast far from home, Bree and Devin embark on separate journeys to courage. Readers will be captivated by the unfolding drama as Bree sails to Norway on the Viking ship and Devin travels the dangerous road home. 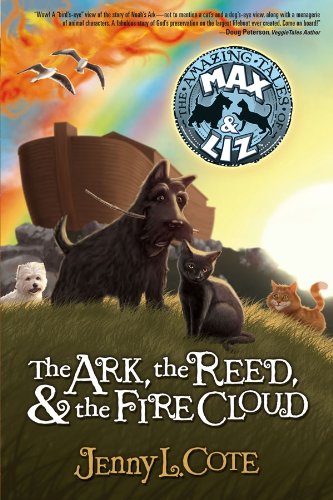 Max, a Scottish terrier, takes his usual morning trot down to the loch where he hears a mysterious Voice humming in the reeds saying, “Come to Me…follow the fire cloud.” He embarks on an unknown journey from Scotland, meeting other animals along the way including Liz, a brilliant, petite black cat from France. Max and Liz become the brave leaders for their group, and eventually, for the entire ark. The mysterious journey, filled with danger, humor, trials, and triumphs, leads them across Europe to the Middle East. The moment of arrival for these animals is spectacular as the ark is miraculously transformed into the animals’ natural habitats.

Throughout the previous one hundred years, Noah and family have endured ridicule from villagers while building the ark. Now this family must painfully witness the loss of lives and total destruction of the earth through the mighty flood.

After the journey to the ark, the voyage in the ark begins. Liz finds ways to keep the animals occupied, including daily exercise led by the flamingos and a talent night where the animals entertain each other with their natural abilities. But a sinister plot develops Someone is out to kill Noah and his family. Liz follows clues that lead her to discover a stowaway who has deceived them all. Max and Liz foil the plot, but at a high price. The end climaxes with unexpected twists and turns, taking the reader from despair to hope. 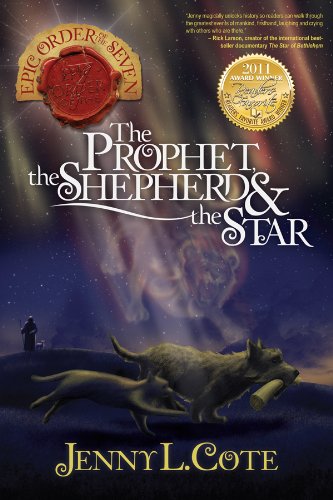 The Prophet, the Shepherd, and the Star launches the Epic Order of the Seven series, picking up where The Amazing Tales of Max and Liz left off. The Maker has been building a team of animal friends for thousands of years to be his envoys for pivotal points of history.
With this new, critical mission, the team will finally be completed by Messiah and known forevermore as the Order of the Seven. A talking, musical scroll, a pigeon-flying-and-camel-driving mouse, a writing cat, a courageous lamb, and two lion-fighting dogs provide non-stop action in this adventure that brings the Christmas story to life as never before. You will be astounded at the accuracy and perfection of the prophecies and God’s unfolding plan to bring Jesus into the world.
The seven hundred–year mission begins long before the Nativity, as animal friends Max, Liz, Al, Kate, and Nigel work with Isaiah, who prophesies about the coming Messiah. The team intervenes with the Assyrians that threaten to take Jerusalem and prove Isaiah’s prophecies false. They go with faithful Daniel and friends into the Babylonian captivity for the heart-pounding thrills of the fiery furnace and the lions’ den. They meet Gabriel as he appears to Daniel, and hide a secret scroll of prophecy for the wise men to someday discover as they study the Star. The book climaxes with the unfolding Christmas story as the animals once again see Gabriel with Zechariah, Mary, Joseph, and the shepherds.
Experience the hardships of Mary and Joseph as they obediently accept their calling to parent Messiah. Joyfully watch God provide for their every need through a lovable Jewish rabbi who dares to believe them and an unlikely Roman soldier who protects them. The shepherds and the wise men never know their steps are guided by these small animals that lead them to baby Jesus. Relentless in his pursuit is the evil lion, who seeks to devour them and stop the unfolding events leading to Messiah’s birth.

My name is Michael Vey, and the story I’m about to tell you is strange. Very strange. It’s my story.

To everyone at Meridian High School, Michael Vey is an ordinary fourteen-year-old. In fact, the only thing that seems to set him apart is the fact that he has Tourette’s syndrome. But Michael is anything but ordinary. Michael has special powers. Electric powers.

Michael thinks he’s unique until he discovers that a cheerleader named Taylor also has special powers. With the help of Michael’s friend, Ostin, the three of them set out to discover how Michael and Taylor ended up this way, but their investigation brings them to the attention of a powerful group who wants to control the electric children – and through them the world. Michael will have to rely on his wits, powers, and friends if he’s to survive. 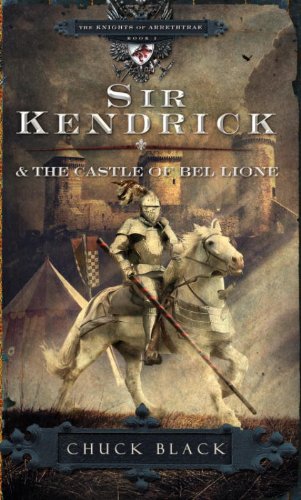 A dangerous new order threatens the mission of the Knights of Arrethtrae. Only loyalty to the King can bring victory!

As the Knights of the Prince await His triumphant return, they are steadfast in their mission to take His story into the kingdom and recruit as many as are willing. But when a new and dangerous threat is revealed, their mission is jeopardized.

Sir Kendrick and his young charge, the impetuous Sir Duncan, are sent on a mission to discover the identity and origin of a secretive new order known as the Conquistero Knights. They travel to the city of Bel Lione where Lord Ra has been enticing young people in the kingdom to join his festivals, after which many choose not to return home. Their families keep quiet for fear of repercussion.

When Sir Duncan disappears while trying to discover the truth of Lord Ra’s castle, Sir Kendrick attempts to find and enlist the help of a mysterious warrior. Time is short for he must save Duncan and call upon the knights of Chessington to join in the battle against the evil Lord Ra.

Journey to Arrethtrae, where these knights of noble heart live and die in loyal service to the King and the Prince. These knights are mighty, for they serve a mighty King. They are…the Knights of Arrethtrae! 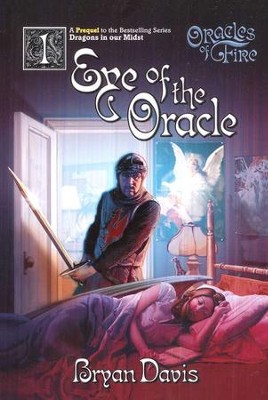 What ancient mysteries lurk behind the amazing stories in the Dragons in Our Midst series? Reading this prequel, you’ll journey back in time to learn how dragons survived the flood and about the ancient evil force that led to their demise in the days of King Arthur. Discover the mysteries that led to the bestselling fantasy adventure that began with Raising Dragons. With heart-stopping fantasy action and clear spiritual insights, Eye of the Oracle will captivate young and old alike, and it will challenge every reader to search deep within for answers to the mysteries in their own hearts. 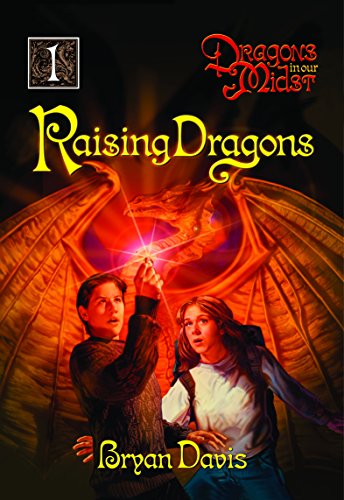 Raising Dragons is a contemporary fantasy novel that inspires young people to dig deep within to find their God-given strengths and use them to overcome any obstacle. It is both a hair-raising, modern-day adventure and a glimpse into another world-a world of knights, dragons, and fair maidens.

A boy learns of his dragon past; a girl has known of hers for years. They combine their faith, courage, and love to overcome evil, a slayer who seeks to bring an end to dragon heritage, forever.