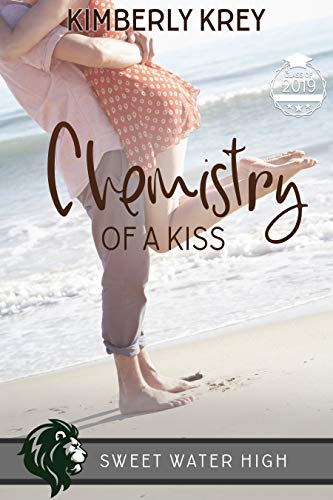 Chemistry of a Kiss by Kimberly Krey is part of Ms. Krey’s Sweet Water High YA clean romance series. I haven’t read any of the other books in the series, and this was my very first read by Kimberly Krey.

Harper is dating TJ but his kisses don’t have the effect she is looking for. She likes TJ and wants to help him learn to make some better choices. Then she receives a partner and an assignment at school. One of her teachers pairs her with Jett and assigns them the project of researching and reporting on “The Chemistry of a Kiss”.

During their studies, Harper finds herself thinking about kissing Jett, but there is a bit of history behind them that causes her some embarrassment. Then there’s the complication of his ex-girlfriend, When Harper’s mother makes a rule that Harper can’t exclusively date one guy, she and TJ figure if Harper lets her mom think her studying on some evenings with Jett are actual dates, things will be okay. That doesn’t exactly work out as planned.

Things get more and more complicated as Harper falls for Jett but isn’t sure if Jett feels the same way or if he’s just trying to make his ex-girlfriend jealous so she’ll come crawling back. When a Sadie Hawkins dance is planned at school, things seem to fall apart around Harper, until another plan is put into action. What happens at the dance is quite a surprise as tensions mount and tempers flare.

This was a great story and an easy read. I enjoyed it from the first page to the last and read it in three nights. I loved the characters and the interactions and relationships Harper had with her grandparents and her mother and sister, not just the peer relationships among the teenage characters. The dialogue and the way Harper thinks are all very realistic and believable. I loved the sweet romance with its kisses. I grew nervous just before the Sadie Hawkins dance, but was thoroughly pleased with the ending as well. I would highly recommend this book to anyone who enjoys clean romance stories. I am older than a young adult, so you don’t have to be a young adult to enjoy this story.

I look forward to reading more books by Kimberly Krey.