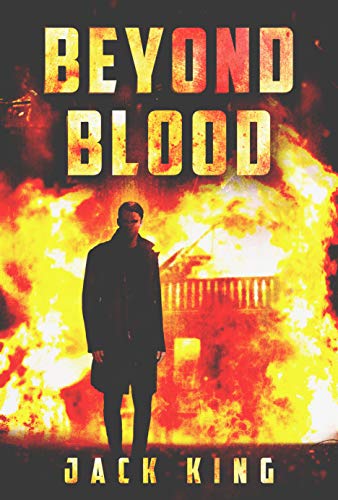 Beyond Blood by Jack King is a murder mystery novel with Detective Cliff Husto on the case. The story is about an advertising agency and how several employees of Mathis & Oliver get murdered by a serial killer — a serial killer that is highly intelligent and leaves no trace that he was even at the murder scene.

This book kept me guessing and turning pages almost to the very end. The first couple chapters seemed to be quite fast-paced and introduced a lot of characters. However, chapter three or four finally fell into a well-paced rhythm and I became caught up in the story. It was difficult to really get interested in and really care about any of the employees and bosses of the advertising agency, but Detective Cliff Husto was a likeable character from the start. As Detective Husto began to unravel the mysteries of the murders, and especially the background of the suspect, things became even more interesting.

I will say that there is a part of the story that I found predictable due to similar stories I read in the past, but in the end, Jack King gave it an interesting twist that made the ending very satisfying.

For those of you who prefer all of your Christian fiction to be completely clean, I will warn you that this book includes some violent scenes and profanity. I will also say that  Jack King created realistic characters and a realistic story, and as Christians, I hope you realize that every story–every Christian life–faces struggles and temptations and none of us is perfect, so to expect everything in Christian fiction to be completely clean and the hero to be perfect, to me, makes for an unrealistic, unrelatable, and boring story. To read a story that has some grit, struggles, temptations, and maybe even a touch of evil is to read about real life.

I highly recommend Beyond Blood by Jack King to anyone who enjoys a good murder mystery with an appealing detective on the case.