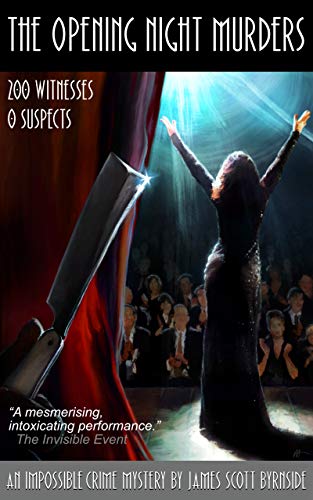 Detective Rowan Manory and his sidekick, Walter Williams, work to solve the murder that took place at The Red Rising Theater on opening night of a new play. While they try to find and follow clues for this murder, more murders follow.

Detective Manory and Walter are reminiscent of Sherlock Holmes and Watson. Walter is quite witty and brings humor to the tragic situations. He is a delightful character.

The cast of characters make for suspicious and possible suspects.

I thoroughly enjoyed this book. James Scott Byrnside did a great job creating interesting characters, twists and turns and complications that led from one murder to another. This book kept me turning pages and had me guessing until the very end as to “whodunnit”.

The ending was well done. The murders were solved and there was a surprise and unexpected twist in the explanation.

The Opening Night Murders by James Scott Byrnside was very well written and I highly recommend it to those who love a good murder mystery. However, I will add a caveat in regard to language — there is quite a bit of profanity in this book.

I did receive a free copy of this ebook for my honest review. This review is my honest opinion about this book.